Showing 2 properties out of 2 currently available on the market. 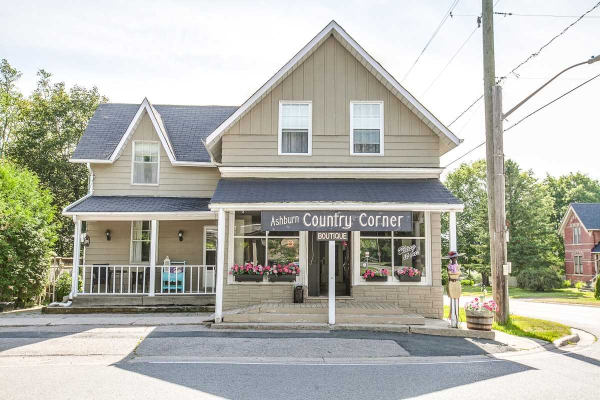 The Village of Ashburn is one of the most prestigious neighbourhood in the Whitby Real Estate market.  The scenic area features extensive open landscapes from its picturesque position on the Oak Ridges Moraine.  The neighbourhood is easily accessible to Highway 407.

The intersection of Ashburn Road and Myrtle Road have traditionally defined the semi-rural community.  Since joining other communities to form the Town of Whitby in 1968, Ashburn homes have borne a Whitby address.  The population is approximately 6500.

Much of the area is protected watershed and habitat. The headwaters of the Lynde Creek watershed, Golden Horseshoe Greenbelt, and the Royal Ashburn Golf Club are in Ashburn.

The majority of properties in Ashburn are set on large home sites, evoking a serene country atmosphere.  Elegant custom homes prevail in the upscale hamlet.

The original Butler’s Corners community became accessible to Whitby Harbor in the 1830s.  Thursday Road, and then the railroad helped encourage settlement will and commerce.  The name was changed to Ashbourne after Ashbourne Derby Shire in England.  It also acknowledged the presence of local asheries the produced potash from cleared trees.  The post office incorrectly spelled the name as Ashburn.

Ashburn celebrated its 150th anniversary in the year 2000.  Several historic buildings in the community have set a pattern of distinction.  A skilled Mason from Scotland constructed numerous stone houses in the area.

Ashburn is partially bounded by Lake Ridge Road and Heren Road on the west and Duffs Road on the east.  Myrtle Road West and Townline Road are the northern borders and Brawley Road on the south.  Ashburn Road also passes north/south through the neighbourhood.

CONTACT TEAM BRYANT FOR ANY ADVICE ON BUYING REAL ESTATE IN ASHBURN!